Imagine you’re an athlete and you’re really, really good. You put in the hours, your parents get you the best coaching by working extra jobs and everyone is very supportive. You make the national team, become highly rated and are the darling of your country. But despite all of your natural gifts and all of the work and all of the support, and you pitch up in your best shape and everything goes right on the day, you still can’t beat Caster Semenya. Then you hear that her (you’re also a woman, btw) testosterone levels tested far above what is acceptable to be classified as a woman.

And that is exactly what is at stake with the Caster trial. Unfortunately, of the 116 women serving IAAF bans in 2016 for doping 64 of them used androgens. Testosterone offers significant performance advantages for women athletes. If it sounds like I’m making a case against Caster continuing to compete, it’s because I am kind of doing exactly that.

The Court of Arbitration for Sport could very well rule that she can continue and publish its female classification guidelines to include her biological composition. That I am totally okay with. Actually, that’s the best outcome that I can imagine. We do, however, need a hard rule to be set. If whether or not she decides to abide by that rule and subject herself to treatment that will lower her levels is inconsequential. All the CAS can do is set a level that she either meets or doesn’t meet.

Your feelings about whether that’s fair or not don’t matter. Sport needs to be on as level a playing field as possible and any wiggle room will leave a door open for unscrupulous entities to genetically engineer an optimum athlete. Hell, I’ll even go as far as saying that at some time in her amazing career a coach probably only viewed her as a genetic freak and not a very talented, hard-working athlete.

Either way, we’ll have an answer by the end of the week and Caster will then have to decide whether or not she is willing to accept the ruling. This is not a violation of her human rights because she chooses to participate and expose herself to the scrutiny of the sport. As long as there is thorough science behind the ruling, we should all make peace with the findings. 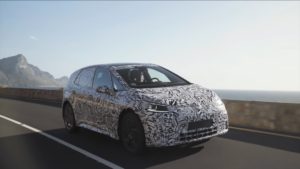 Volkswagen is finally going to stop teasing us and will put the all-electric ID car into production by the end of this year. The carmaker cites the complexities of its ambition to be carbon neutral as the main reason for the delay. That’s quite admirable, actually, because the little-known fact about electric cars is that producing them is terrible for the environment. Using clean energy to build and run the cars, along with using fair trade materials and promoting recycling or limiting waste is a thoughtful approach to motoring.

The ID will be the iPhone of cars if it is made this way. We in South Africa are still waiting for the Jaguar i-Pace to go on sale (reportedly next week) and you can bet a lot that I’ll do everything in my power to spend some time behind the wheel of the finest EV on our roads.

It was a nice touch to bring the development mules to South Africa for the test drive. That header is childish, and I apologise. But the pension fund pilferer just can’t get it together. You can’t say that you don’t dictate coverage terms to the editors in your media company and then have your opinion piece on the front page of every major newspaper you own. I do love that I had the exact same idea as celebrated media person Ferial Haffajee to compare Surve and Jeff Bezos.

Washington Post got Jeff "I won't let my media company be silenced" Bezos and Cape Times got Iqbal Surve. https://t.co/nGmharjoY4

I’m also astonished that he would get involved with a company named after a forgettable 50 Cent track and expect that to be a deterrent for any would-be investigators. Did you see what happens when Jessie Kriel straightens the line and actually passes the ball? Bonus kudos to De Allende as well, I saw you get a couple of passes away big fella. Yes, I am happier when the Bulls play well – and ecstatic when it coincides with an emphatic victory over the old enemy.