News flash: I’m not at CES. It’s always been the tech show that eluded me. It’s also the most difficult to quantify in the South African context because of its location (Las Vegas) and how it affects what gets announced (US-focused products, mainly). The biggest separator for us is the lack of Amazon presence on our shores. Alexa has ruled the CES show floor for a couple of years now, but not anymore. Amazon had their Alexa fest at the close of 2018, so Vegas is there for the taking. 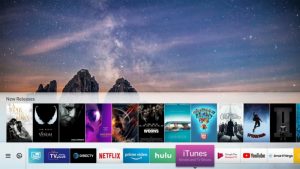 You already know about quantum dot technology and full array local dimming – tricks that help LCDs perform like OLED panels – and nothing has changed on that front. But now we have 8K panels in the wild that use AI and machine learning to upscale content. I care little for resolution buzz, though, because 1080p will still be fine for most SA consumers for a long time given our data speed problems. Samsung still loses out to its compatriot with regards to pure technology achievement but leapfrogged the TV industry when it comes to integration. iTunes coming to 2019 and 2018 Samsung TVs is an incredible coup and also a full admission from Apple that it isn’t adding a screen experience to Apple TV in the near future.

I don’t have a new Samsung Smart TV so I don’t have any skin in the game, but knowing that I can access my iTunes library natively on one makes it the best option for when my money ship comes in and I can afford expensive new things. See, I’m a long-time Apple TV user with an extensive movie library – Into the Spider-verse is on pre-order already – but don’t have a way to access that content in my bedroom outside of the confines of an iPad screen. Setting the Samsung Smart TV in the lounge will allow me to send the Apple TV to the bedroom. But beyond that, full Bixby integration with AirPlay 2 and HomeKit support make Samsung TVs a great option for Apple users. A whole new world of speaker integration outside of Homepod and general IoT awesomeness just opened up for fruit fans and it’s magical.

Yes, I said Bixby earlier and with Google services now also making its way to playing nice with the much-maligned voice assistant is the ultimate validation for the hardware key on premium Samsung devices. I’ll do a full laptop round-up tomorrow and discuss Notebook 9 there – along with my insider scoop – but you can miss me on the FamilyHub stuff because I’m not about the screen on your fridge life. 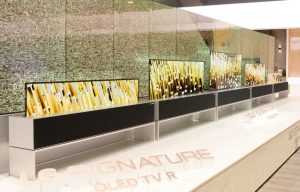 LG flexes in a weird way

The rollable OLED TV is finally a thing. That’s incredible. Less incredible is the home device collaboration demo that suggested help from the robot vacuum cleaner when the presenter picked up the stick vacuum cleaner. Amazon Dash replenishment is also getting space in the ThinQ ecosystem so your washing machine will be able to automatically order new laundry detergent and give Amazon more of your habit data. Which brings me neatly to the piece de resistance (#sarcasm) of the entire presentation: LG Homebrew. It’s a countertop beer maker that reduces the complex art of beer crafting to a pod-based system and a one-button operation. The problem I have here is that there’s already too much bad beer in the world. Also, we should be supporting those who are most passionate about these things financially in order for them and humanity to thrive.

LG also added in Airplay functionality to its devices alongside HomeKit integration and Amazon Alexa compatibility to complement the best use of Google Assistant I’ve yet seen on a TV set. The introduction of 8K OLED with AI enhancement is just LG engineers dunking on the competition. Standout AI functions are definitely the voice boosting and the ambient light colour adjustment. What LG lost with regards to user appeal though is a devastating blow to the company. Consumers have already shown that hardware advancement alone won’t sell devices, 2019 is a software service market. Samsung currently offers better services and no amount of hardware technology innovation can compete with that.

If you’re in the market for a Smart TV then your best option this year is a new Samsung unit. Sorry LG. That rollable screen is still hella interesting, though. 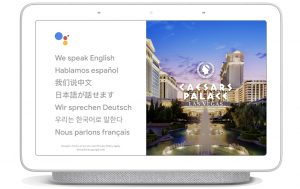 in big news for the South African Market, Android Auto is finally available on Google Play. No more sideloading the best option for replacing your car’s hideous default infotainment system. Google Assistant is also being baked into the iOS Google Maps app, which will add more active users to the service. And there’s a slew of new Google Assistant-equipped smart displays floating around the CES show floor, including one from Kitchen Aid. And there’s a new real-time translator function being trialled for hotels on the HomeHub. And new developer tools for easier IoT functionality. And Google Assistant is also making its debut on Samsung TVs.

Google loosing its control over where and how Assistant can appear is great for the future of voice as a platform, but also terrible in these privacy-conscious times. There is widespread, legitimate concern about Google’s data monopoly and the potential for malicious use of that data. And when contrasted with Apple’s latest tentative steps into the open IoT (Internet of things, sorry for assuming) market backed by the company’s server-side software data encryption, it seems like the Big G is making a bolder play at customer data collection. Apple has stated on record that iTunes and Airplay on non-Apple devices will be free from the rampant snooping Smart TVs are known for.

Only time will tell whether Google religiously sticks to its “do no harm” chops, but I can assure you that the smart home of your dreams is a bit closer now that Google is letting Assistant loose. 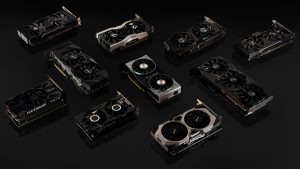 Nvidia is just lapping everyone now.

Geforce RTX 2060 is a beast. There’s an entire new benchmark dedicated specifically to ray tracing, which the company has spent the last 10 years developing. Okay, let’s back it up. Ray tracing allows graphics processing to predict the path of the light photons it is depicting on the screen to more accurately display light and reflections. Obviously, this increases the computing load exponentially and that is evidenced in the decade-long journey Nvidia has been on to get us here.

There is rarely a truly game-changing product launch on the stages of CES, but I can’t see a world where RT technology doesn’t overhaul how computer graphics intensive media is created in the future. And this is all at the same show where IBM dropped yet another quantum computer concept, the Q System One, that takes us nowhere nearer to the future of number crunching. Nvidia has a healthy lead in server processing, autonomous car development and now just upended the GPU market once again.

There was, once again, a lot of chatter about 5G. Mobile World Congress will be filled with talk of a bright future. It won’t happen this year, especially with the US and other major countries boycotting Huawei technology. Huawei holds all the 5G aces right now and not using its components will set the commercial roll-out back at least six months, which will probably translate to two years for South African consumers. Save some bucks this year and give 5G devices a skip until your next upgrade. LTE will still be relevant for a long time.