China yesterday made the medicinal use of rhino horn and tiger bones legal. This is a complete surprise turn of conservation events given the previous commitment to outlawing ivory trade, and you are fully justified in your outrage. But I think there’s a silver lining if you’ll indulge me. 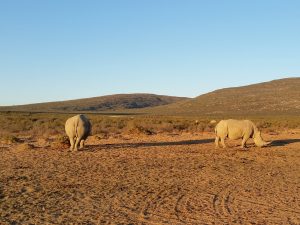 Because the legalisation is restricted to medicinal use, the trade of these substances now falls under broader medical industry regulations. That means strict import laws. Yes, I do understand that the 25-year ban didn’t stop the poachers from getting product to willing customers. And you are correct in your guess of what I’m about to suggest.

When it comes to rhino conservation I’m very much for the approach of entrepreneurs like John Hume. Hume is farming rhino on his Buffalo Dream Ranch in Mpumalanga with the idea of legal rhino horn trade using humane horn harvesting practices. Rhino horn is made from keratin, just like your fingernails, and grows back. He already has 1 500 mostly white rhino and is targeting 200 horns per year.

It’s not a difficult concept to understand. If you flood the market with regulated rhino horn the hypothesis is that it should diminish the value of illegally harvested horn. That poaching has only increased in the years that trade was banned speaks to the human capacity for risk. People will get hold of their favourite thing no matter what the cost.

Copy and paste this idea to tigers, marijuana and lion hunting and I believe you’ll see similar declines in illegal activity. Well, there isn’t really a humane way to harvest tiger bones or hunt lions, but we should rather seek to protect the wild animals and not sweat the purposeful breeding too much.

I’m deeply disappointed in the Chinese government for making this decision, but maybe its a precursor to regulated trade that equals an economic boost for South Africa.