“But when is he going to run a full marathon?” says my mother-in-law to my wife, mockingly. She knows I’m within earshot and is trying to get a rise out of me. It’s the evening before the Outsurance Life/KFM Gun Run and I’m about two weeks under-trained. She’s won this battle because I felt compelled to explain my station. This is something I do a lot and is central to all of my failures and personal failings. This doesn’t happen when I run a race. 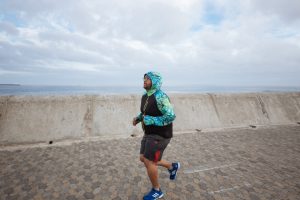 Gun Run 2018 was my slowest half marathon on record, but I still won. The “win” I’m talking about is that I entered and trained for a 21K even when most people were telling me to only run the 10. My logic is this: I’m more focused when I’m training for a race and I needed a bit of that focus to launch this new project of mine because no-one is going to hire a washed-up magazine editor right now.

It’s the discipline to reach the finish line that I lack. Not the hard work before, but the follow through. The attention to detail in execution.

Gun Run 2018, for instance, was a microcosm of all my personal failings. I had too many shoe options and changed literally right before I walked out the door – vintage indecision. I also purchased a new running belt to hold my smartphone, but decided to go with the older one because somehow the two previous 10K races wasn’t enough experience with the new kit – overthinking. Then after conquering 75% of the race in good form, even after putting in the graft of running the entire Kloof Road, it all fell apart on the promenade. 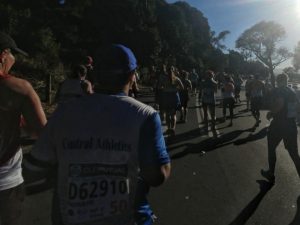 I had a banana when I got out the car to go to the start. That’s the only thing I ate before the race. Last year was the calf cramps from Maiden’s Cove, this year was dizziness on the promenade.

Running is a destructive sport. I’m overweight so the 24 hours after a race is mostly my knees trying to decompress and my tendons trying to figure out what the hell just happened. I love the sport because of the pain you need to endure to have that glorious smugness of knowing you did something an overwhelming majority of people are too afraid of doing because it’s uncomfortable. And even in the glory moments I still feel like an imposter because the times don’t necessarily reflect the effort. 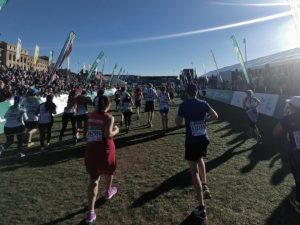 Like most things in my life I celebrate those victories alone, or with my family. Because no-one else understands my journey. Just like no-one understands your journey. It’s about you and you need to take ownership of that.

We only measure ourselves against others because of insecurity. The number on the scale is not a reflection of the broader positive change you bring in your life when adopting the discipline of training. That number is only important in a society that looks for cheap fixes. A world that only cares about superficial success, not the life-changing transformation.

It’s Insta-fashionable to brag about our physical exploits on social media. Our vanity has permeated every facet of our being that pain and, in some really strange moments, grief needs to be glamourised for likes. If it inspires someone else to get up off their arse and bring about a positive change in their lives, then I’m all for it. Take fewer pictures, though. Find the meaning in yourself and not the world’s validation. 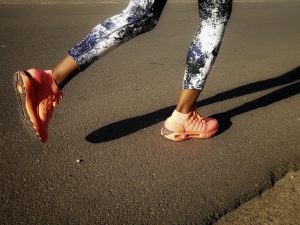 And always remember, like a quote my wife shared with me, “Unless you fell off the treadmill this morning, no-one wants to hear about your workout.”

1 comment on “What running races taught me about life”